Usually I try to write a small blognote before the release of a film. Did so for the first three releases, but this fourth one has been different in many respects. On May 29th I arrived back from Chennai to Kochi at 8pm after 56 sleepless working hours to find my two year old son, angry with me. He wouldn’t speak to me or even look at me since I had been away from him for 7 whole days for the sound postproduction. It broke my heart and so blogging about the release of Bangalore Days the next day, did not happen. (For those who care: hours of cajoling later he let me kiss him. Phew!) 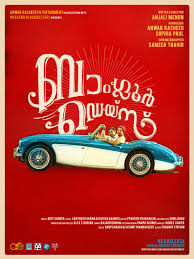 A familiar scene from my life. Everyone’s ready but me – am running helter-skelter coz I can’t find what to wear! Finally I pull together three pieces in the same colour and run to catch the first show in time. My mother stays at home with mon. Everyone else off to the theatre with me. Nervous? No way… Scared to death is more like it.

In Bollywood they have a saying “Sholay ke baad Shaan hi banti hai” meaning after every huge success there is a giant failure. It happened in the case of Sholay & Shaan and a hundred other examples. Would it be in the case of Ustad Hotel & Bangalore Days?

Was I crazy or wot? A multi narrative, with these many actors, motocross racing and every other factor only adding onto the expectation… some kind of madness this was… nevertheless here we were…

Folks are rushing in for the show. I send my family in and look out for Anwar – my friend, philosopher & producer. I found him still sitting in his car! I jump in beside him and admit that am too scared to go in.

Me: “what are you doing here?”

He: ” Eh…I’m like this for first shows, I don’t sit in one place…Eh… I get tense inside”

Cut to: So there I was, sitting in the darkened theatre with the crew, the cast, the friends, my brothers, my husband on my left , Littil Swayamp, my ‘right hand’ appropriately on my right. Yes in that hall, were people who had worked to the bone for this film and also the few who had b****ed me out during the making of this film. But most importantly I was sitting with the AUDIENCE.

Fade in: Kuttan’s face appears, he straightens the knot of his tie and smiles “After a great consideration and consultation I came to the conclusion…”

My memory is all woozy from there on… but yes – it has all come to a conclusion. A happy one 🙂 Thank heavens!!! And thank all of you who made our Bangalore Days YOURS. 30 Bangalore days makes a happy month! 🙂