Sharing an article I wrote for Times of India on Kerala Piravi, November 1 2018.  Because the same conversations are happening all over again. As someone said, those who understand, will and the those who don’t, wont.  Running, swimming same same. 😀 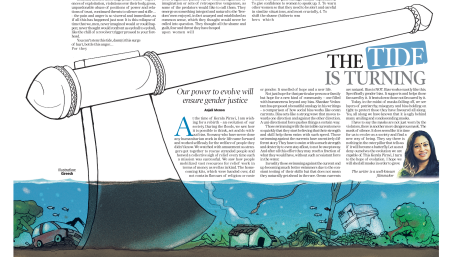 At the time of Kerala Piravi I am wishing for a rebirth – an evolution of our society. During the floods, we saw how it is possible to think, act and do without bias. So many who have never done any humanitarian work in their life came forward and worked selflessly for the welfare of people they didn’t know. We watched with amazement as strangers got together to rescue stranded people and heave a collective sign of relief every time such a mission was successful. We saw how people mobilised vast resources for relief work in terms of money as well as in kind. The homecoming kits which were handed for the homes did not contain flavours of religion or caste or gender. It smelled of hope and a new life.

Not just hope for that particular person or family but hope for a new kind of community – one filled with humaneness beyond any bias.

Shankar Vedantam* has proposed a beautiful analogy in his writings – a comparison of how social bias works like ocean currents. Bias acts like a strong wave that moves towards one direction and against the other direction. A uni-directional force the pushes things a certain way.

Those swimming with the invisible currents move so quickly that they start believing that their strength & skill helps them swim with such speed. They rarely realise that the power of the current is what pushes them ahead and makes them reach beyond their individual capability.

Those swimming against the currents have an entirely different story. They have to swim with so much strength and dexterity to even remain, to not be swept away. And after all this effort they may reach a fraction of what they would have, without such a resistant force in the water.

In reality those swimming against the current end up becoming much better swimmers due to the constant testing of their skills but that does not mean they naturally get ahead in the race.

In an environment where all biases were suddenly lost to calamity, we saw people come forth and be their best and we witnessed an evolution of selfless spirit that was truly remarkable. We saw REAL heroes. What would life be like if we swam out of the bias that is holding us back?

Today in the midst of masks falling off, we see layers of patriarchy, misogyny and bias holding on tight to protect those they have favoured all along. Yes all along we have known that it is ugly  behind many smiling condescending masks. But rather than hide and brush any more things under the carpet, let us do some spring cleaning.

I have to say the masks are not just worn by the violators, there is another more dangerous mask. The mask of silence.

It does seems like it is time for us to evolve as a society and find a new way of being. They say there is nothing in the caterpillar that tells us if it will become a butterfly. Let us not deny ourselves the evolution we are capable of. This Kerala Piravi I turn to the hope of evolution. I hope we will shed all masks in order to grow.”

4 thoughts on “Same same? Not really.”